When I asked my son if he would like to have a Nerf gun party for his birthday, he was beyond excited. So, with the help of my super creative sister-in-law, I began searching on Pinterest for some Nerf gun party ideas and I found many great ideas! The Blackberry Vine shared a lot of great pictures and explanations on how she did a Nerf gun party, and I used this mom's cake for inspiration for our cupcakes. Speaking of cake, these cupcakes were a source of frustration in my life. I had a dear friend come over the Wednesday before the party and we practiced how to use the #27 star tip and the practice cupcakes looked wonderful. However, when left on my own Friday afternoon, I could not get my icing RED. So, instead of making white and pink bullseye target cupcakes for my 11-year-old son and his friends, my creative sister-in-law (who lives nearly 1,000 miles away) suggested over the phone while I was in a state of panic that I use the rope Twizzler candy. So, I went to the store and picked up some rope Twizzler candy a big box of M&M candies (just in case the Twizzlers didn't work). I then came home and tried to save the cupcakes. I was so disappointed with these cupcakes, but you know what? My son did not care. He thought they were cool and tasted great. So, I'm trying to relax a little, be thankful I have a son who is so easy to please and get over myself. Did you know his birthday party had nothing to do with me? Well, except the fact that I carried him for 9 months, and went through a c-section in order for him to be delivered safely. 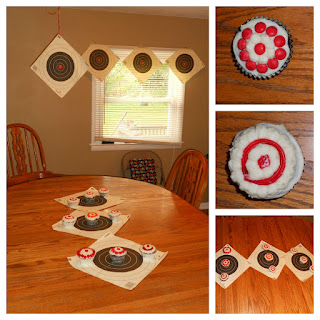 Bullseye pizza was a fun and easy way to keep the theme going with the food. 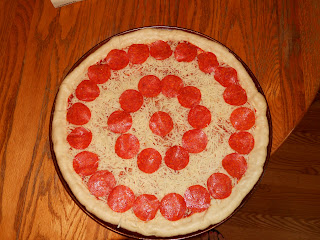 My son's gift from us (his parents) was this shindig we threw for him, his motorized super cool Nerf gun and his friends each got to take a gun home too. Do you think he liked his gun? I'm just not sure? Is that a look of disappointment or pure delight? 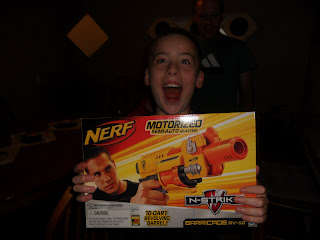 Tyler invited a total of five boys, but only two were able to attend. That is one of the downers of having a summer party - so many of your friends might be on vacation and not able to attend your party. My husband did an absolutely amazing job with these boys. They played some indoor games to get used to their guns before going outside and having an all out war. I think the boys called it a sudden death match.
First, the boys had to assemble their weapons, and the first boy to do that and shoot a dart inside one of the cups was the winner. Then, each boy was individually blindfolded and the red targets were placed around the room. Once the blindfold was removed, they had to find the targets, shoot them, and the one to do it the quickest and using the fewest darts was the winner. The last indoor game was a good old fashioned stand off. The boys started back to back, took three steps forward, turned around, and took a shot. If you hit your opponent, you were declared the winner. 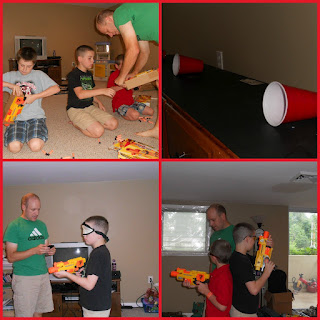 He is taking this very, very seriously. 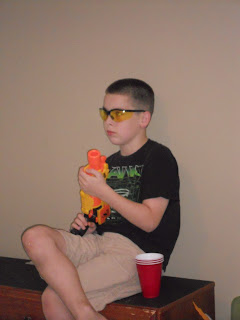 Here's a tip for you, so you can learn from our mistakes. Mark off an area for an outdoor Nerf war. Otherwise, you will have a very, very hard time finding the darts once you're done. These guns held 10 darts and they shot out quickly so they were EVERYWHERE! 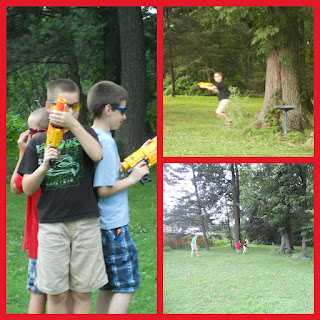 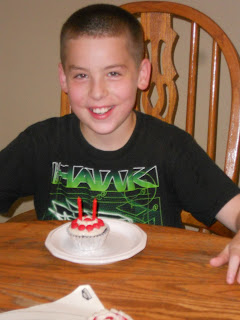 Today (August 7th) is his birthday. He has requested chicken and dumplings for his birthday dinner and I froze some of the cupcakes from his party, because a boy has to have cake on his actual birthday!
Posted by Nikki at 8:40 AM

Labels: Family Life, In the Kitchen


Excellent blog you’ve got here.It’s difficult to find high-quality writing like yours nowadays. I really appreciate individuals like you! Take care!! Please check out my site.
Toy guns for kids

I needed to thank you for this phenomenal read!! I unquestionably adored each and every piece of it. I have you bookmarked your site to look at the new stuff you post. Best Nerf Guns

Interesting blog and I really like your work and must appreciate for your work for the Nerf Gun Party.

Nikki
My husband and I are in full-time ministry. He is a pastor and I am a youth director. I am also a home educator and homemaker. I fight hard to "be joyful always" (1 Thessalonians 5:16).

More Ways to Connect & Encourage One Another

Joy in the Journey