This is a sample of what the children learned about Egypt. The artwork included was done by my 6yo daughter. The report below was the narration that my 7yo son and 6yo daughter did together after reading about Egypt in The Usborne Time Traveler book, and Tut's Mummy by Judy Donnelly. To read more about narration, go HERE. 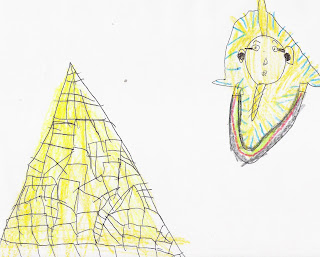 Egypt Life...How Pharoahs turn into Mummies
by T and K
January 2009
Preparing a Mummy
When a Pharoah dies, men called embalmers make them mummies. They take out the heart, the brain, and other organs. The embalmers use a special salt to dry out all the moisture from the body. They pour the salt all over the body. This takes many days. Next, they wrap the linen around the dead body. The Egyptians believe if you tuck charms and jewels into the mummy cloth it will keep evil spirits away. A golden mask is placed over the mummies face. Then the body is wrapped again. It takes 70 days to make a mummy.
The Funeral
The Queen follows and prays to the gods loudly. The priests dress-up like animals. Servants follow. They carry the body of the Pharaoh that is a mummy now. Some are worshipping their gods and crying. Some servants carry the King's treasure, and statues they believe will turn into magical servants for the King in the afterlife. Some Pharaohs were buried in the pyramids the Egyptians built. Some, like King Tut, were buried in a tunnel they dug out in a place called "The Valley of the Kings."
Egyptians believe the Pharaohs need all these things in their burial tomb for his afterlife.
We know the Egyptians were worshipping false gods because when these tombs were discovered nothing had been used.
Posted by Nikki at 7:00 AM

K is such an artist! I am always so shocked with her work! Remember her snow white?! She is so talented!

She definitely has some natural talent! I'm amazed! She got that gene from my Mom:)

Nikki
My husband and I are in full-time ministry. He is a pastor and I am a youth director. I am also a home educator and homemaker. I fight hard to "be joyful always" (1 Thessalonians 5:16).

More Ways to Connect & Encourage One Another

Joy in the Journey